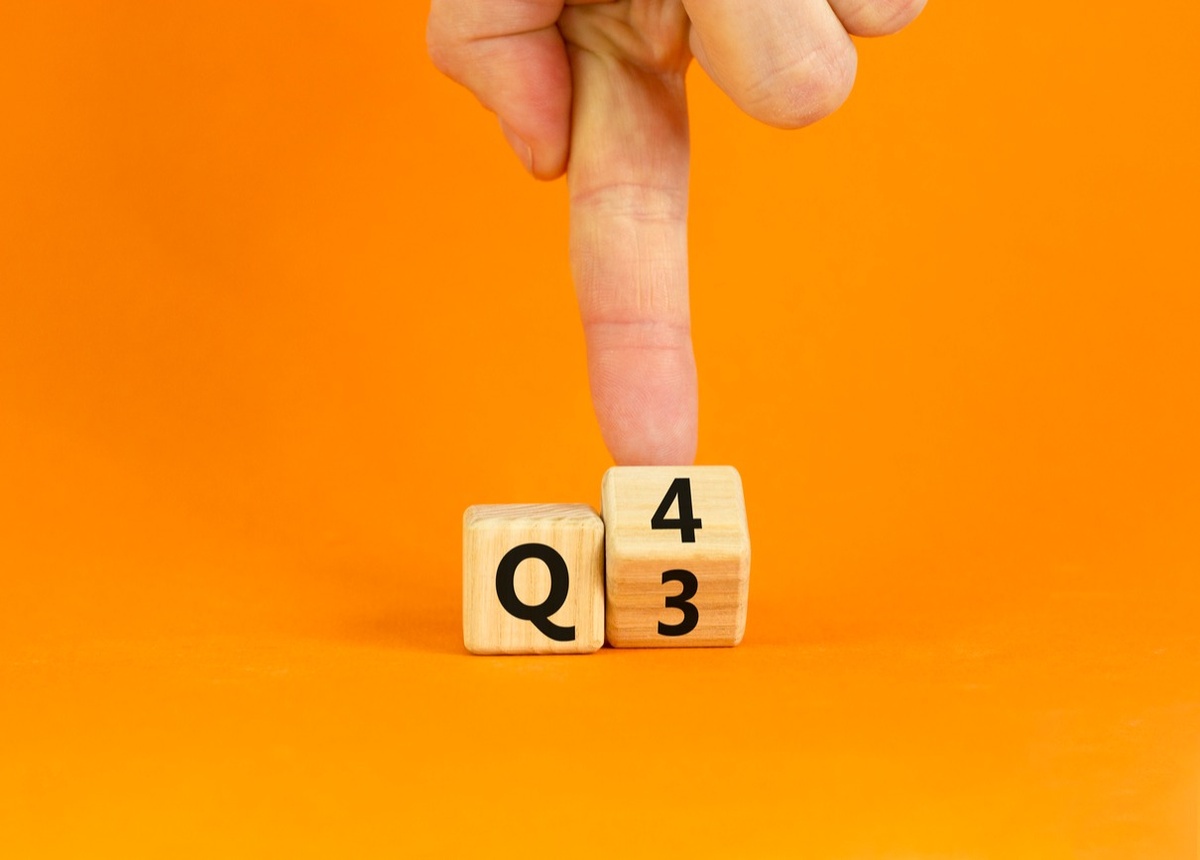 The third quarter of 2022 was disappointing for investors. Although Q3 started out on a strong note with the market rebounding nicely, the excitement was short lived. Higher inflation levels combined with the increasingly hawkish commentary from the Fed, put an end to the rally and ultimately resulted in a loss for the quarter. Despite how bad the market felt in the last six weeks, the S&P 500 total return for the third quarter was down less than 5%, reporting a loss of 4.88%. The fixed income market was down in line with the equities market for the quarter, finishing down 4.75% on the back of the higher-than-expected interest rate increases from the Fed. Although at times we may repeat ourselves, there is clear evidence of inflation beginning to slow, though it will take several months to get to levels needed to appease the Fed. Despite the current market performance, staying invested and following your plan has proven to be the path to follow in all prior downturns.

In this edition of the Windsor Perspective, we review the market performance for the third quarter of 2022, inflation, the upcoming elections and how these factors may impact the markets going forward.

For the third quarter of 2022, the S&P 500 delivered a total return of -4.88%. Similarly, the fixed income market, represented by the Barclay’s Aggregate, had a total return of -4.75%. The quarter itself was broken in to two opposing time periods. The first six weeks of the quarter saw a market rally, with the S&P generating a solid return of 13.73%. However, this rally was quickly reversed with higher-than-expected inflation readings and an increasingly hawkish Fed that wanted to prove they were not going to lose the battle against inflation. As the Fed ramped up their hawkish commentary and continued to raise rates at an accelerated pace, the S&P 500 fell 16.71% the last 6 weeks of the quarter. 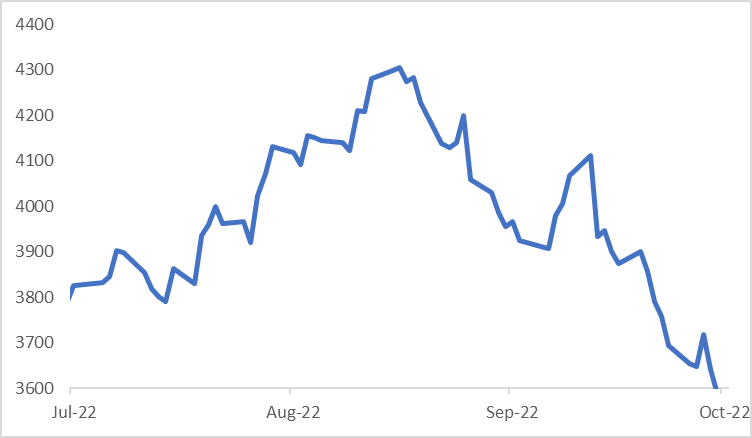 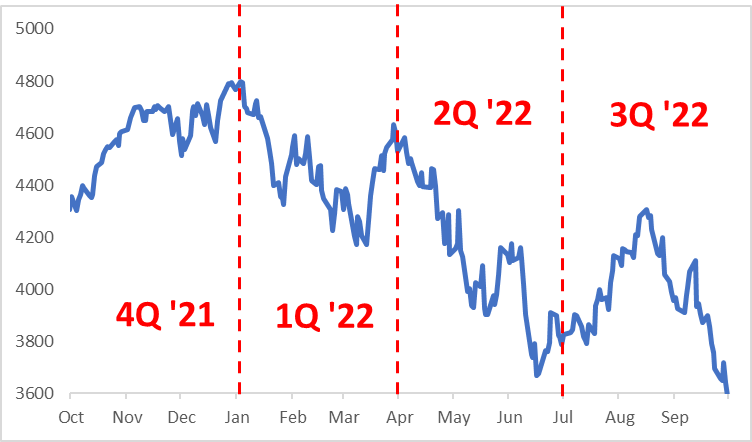 Despite the most recent pull back in the market, many leading indicators of inflation are showing signs of relief. Unfortunately, it does take time for this data to make its way into the numbers. Despite the fact we have been seeing this data soften the past 6-8 weeks, it has not yet meaningfully found its way into the reported CPI data. The good news is we should begin to see this lower inflation data gradually begin to show up in the reported data, slowly moderating overall reported inflation. Here are just a few examples of recent data indicating inflation is coming down:

The chart below of the ISM prices paid shows very strong improvements for both manufacturing and services. Manufacturers prices paid is actually below the long-term average while prices paid for services is down to 71.5 from the peak of 85. Although this is still above the 25-year average of 60.1, it shows rapid improvement is taking place. 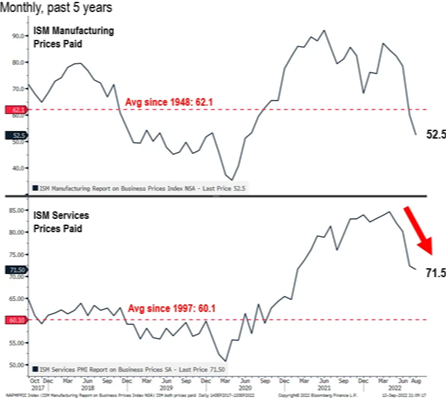 U of Michigan inflation avoiding the 1970s - 1980s comparison 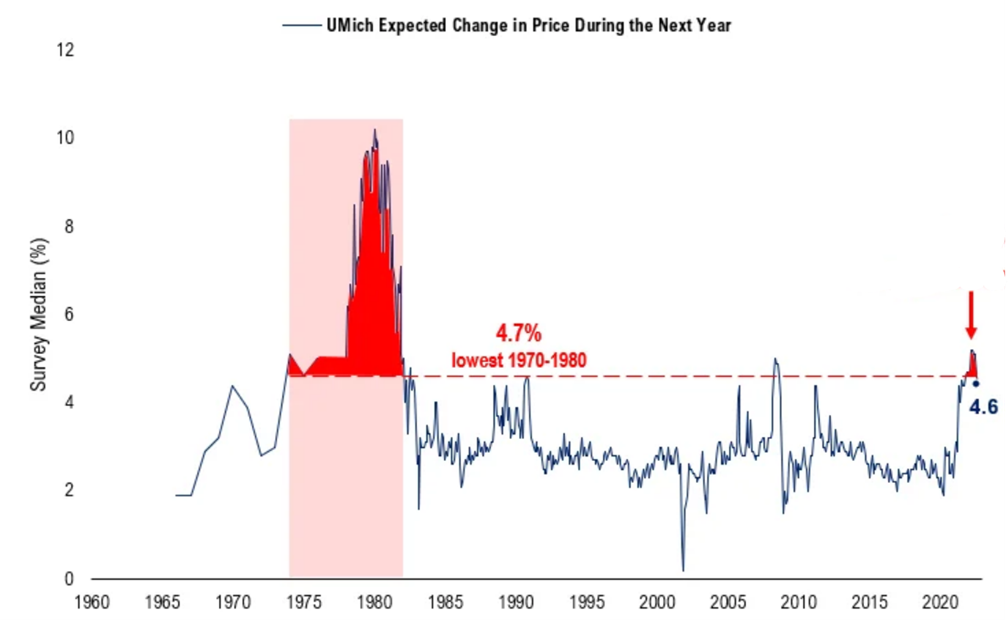 There are many other examples we could show of inflation rolling over, even in components such as shelter (rents and housing prices). The evidence is compelling that we should see continued downward movement in reported inflation. Unfortunately, it will take time to get to the desired range of 2-3%. The silver lining is that the market is forward looking and will respond well before we reach those levels. The key will be to see inflation continue to moderate and a Fed that shows confidence in their plan and does not come out more aggressive and surprise the markets once again as they did in August.

Another topic that will be in focus in the fourth quarter is the mid-term elections. Mid-term election years have typically been tough for the equity markets, with the markets experiencing an average intra-year pullback of 19%. This year has not been spared. But there is good news - historically, regardless of the election outcome, the markets have reacted favorably to the elections as this reduces uncertainty and removes an overhang. Since 1946, the market has not declined in the 12 months following a midterm election. As a matter of fact, the market typically begins to rally in October, prior to the elections. 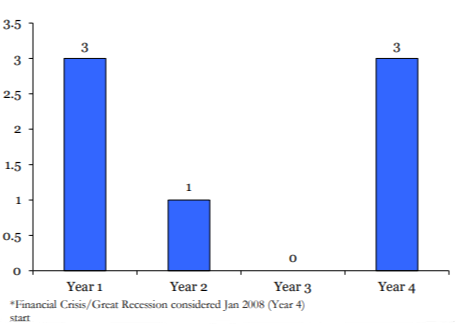 Directionally, the S&P 500 so far this year has followed the historical trend of the average midterm election year since 1962. The only real difference is this year has seen larger percentage declines compared to the average year (left axis vs right axis below).

The issue this midterm election year is what impact inflation will have on market returns. In both 1974 and 1978 stocks did not rally into the midterm elections due to increasing inflation. However, both of those years were experiencing double digit inflation which is much higher inflation than what we are seeing in 2022 and it was still accelerating. This year we are beginning to see inflation wane, not accelerate.

Yet, there is one thing 2022 has in common with 1978, the amount of interest rate increases experienced during the year. This chart below was prepared prior to the 75-bps hike in September, thus, we only need 50 bps more of rate increases (which is fully expected) this year to achieve the same level as 1978. We most likely will get another 125 bps this year, easily passing 1978 levels. 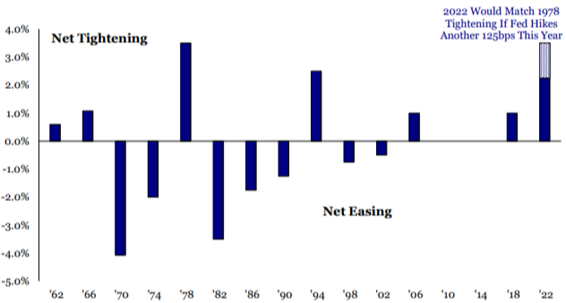 In 1978, the market did not pull back like we have experienced in 2022. As mentioned, 1978 was also one of the few years that did not rally into the midterm elections due to rising inflation and higher interest rates, though it did rally from April to October. As mentioned above, we are avoiding the higher inflation levels of that time period. This makes it difficult to compare the two years. But it also could mean 2022 needs to catch up into year end. 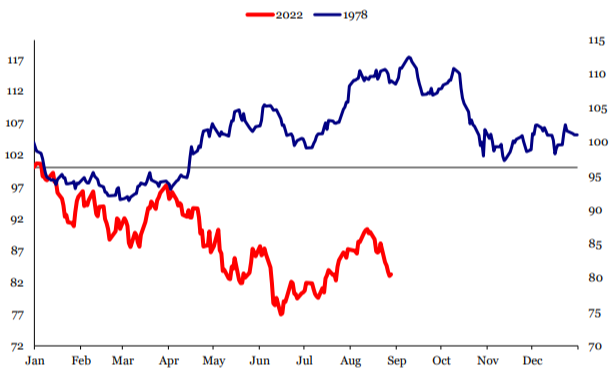 2022 is tracking 1970 much closer. However, as shown in the chart earlier, 1970 saw the Fed reducing rates as inflation was falling. Interestingly, there were many similarities between 1970 and 2022 in terms of the economic and political environment that could be driving the high correlation between the two years. 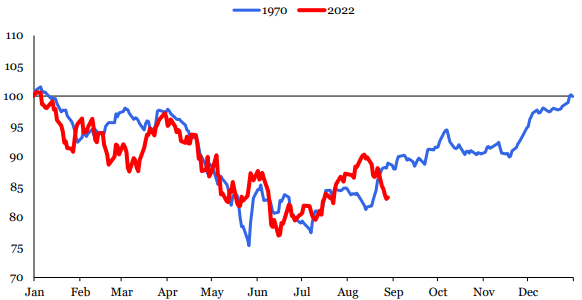 Despite inflation being the wild card this midterm election year, the two most likely outcomes of the election based on current predictions (red bars in the chart below) historically result in solid annual performance for the S&P 500. At the current time, the election odds favor either Democrats controlling the Senate with Republican control of the House, or Republican control of both the Senate and House. As shown below in data from 1933 – 2021 (this data excludes 2001-2002 due to Senator Jeffords changing parties mid 2001), when Democrats control the Senate, Republicans the House, and a Democrat as President, we typically see annual performance of 13.6%. When Republicans control both the Senate and House with a Democrat as President, the returns average 13.0%.

It is important to emphasize during these trying times in the market that staying invested, though it can feel painful, is the right strategy. Analysis has shown that 62% of the best days in the market happen during bear markets. With the volatility we have experienced in 2022, the path to higher prices is not likely linear, and the market will remain difficult until there is convincing evidence that inflation will trend lower. But volatility begets volatility, as the worst days in the market often invite the best days. Patient investors have math on their side, with the risk of missing the market recovery offsetting the cost of being early. As the chart below shows, volatility clusters are two-tailed with the best days and worst days happening very close to each other.

As we mentioned in prior notes, if we look at the market from a 40,000 foot level, we see that “bear market” type of declines happen every few years, but are more than offset by much stronger recoveries in the market. Although these declines feel painful at the time, looking at the full cycle shows the returns have always far outperformed the periods of loss. 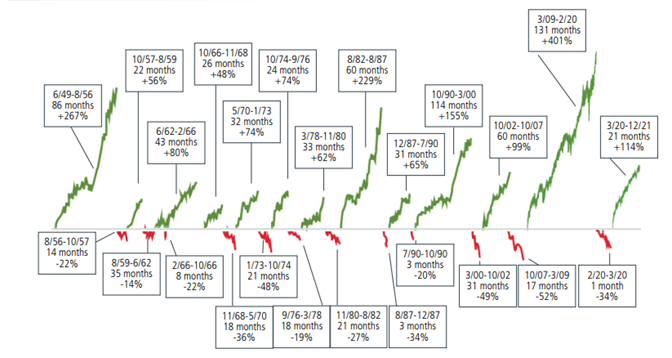 In conclusion, Q4 is going to be an interesting quarter. From watching inflation to the outcome of the midterm elections, the markets will be absorbing every bit of information to determine the path forward. Based on the inflationary indictors showing signs of relief and historical precedent with the elections, we could begin to see recovery in the markets. There will continue to also be concerns on the risk of a recession in 2023 as well as earnings estimates coming down further for the S&P 500, but if inflation does indeed begin to slow and the Fed does not become more aggressive, the economy and markets should be able to navigate these issues. 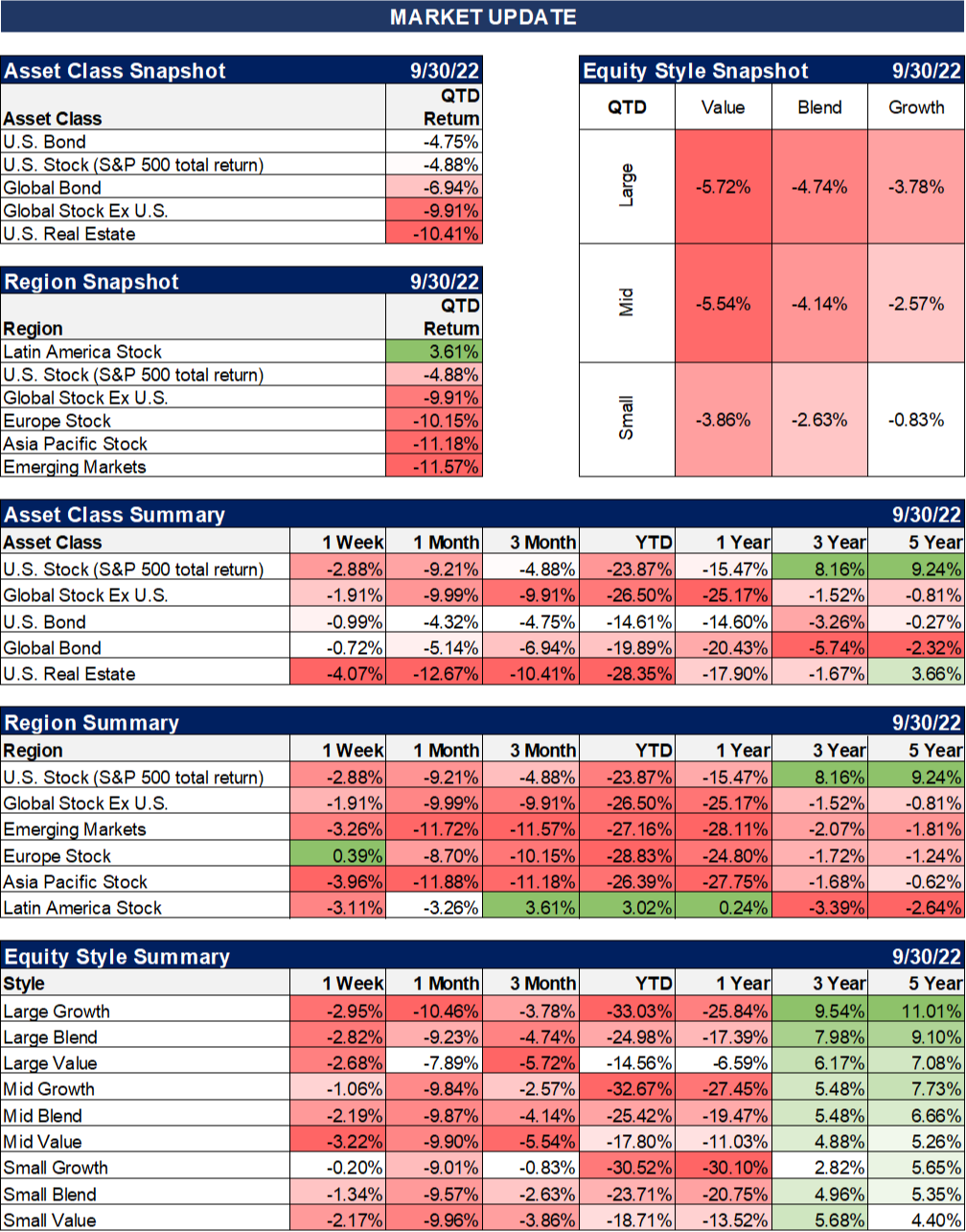