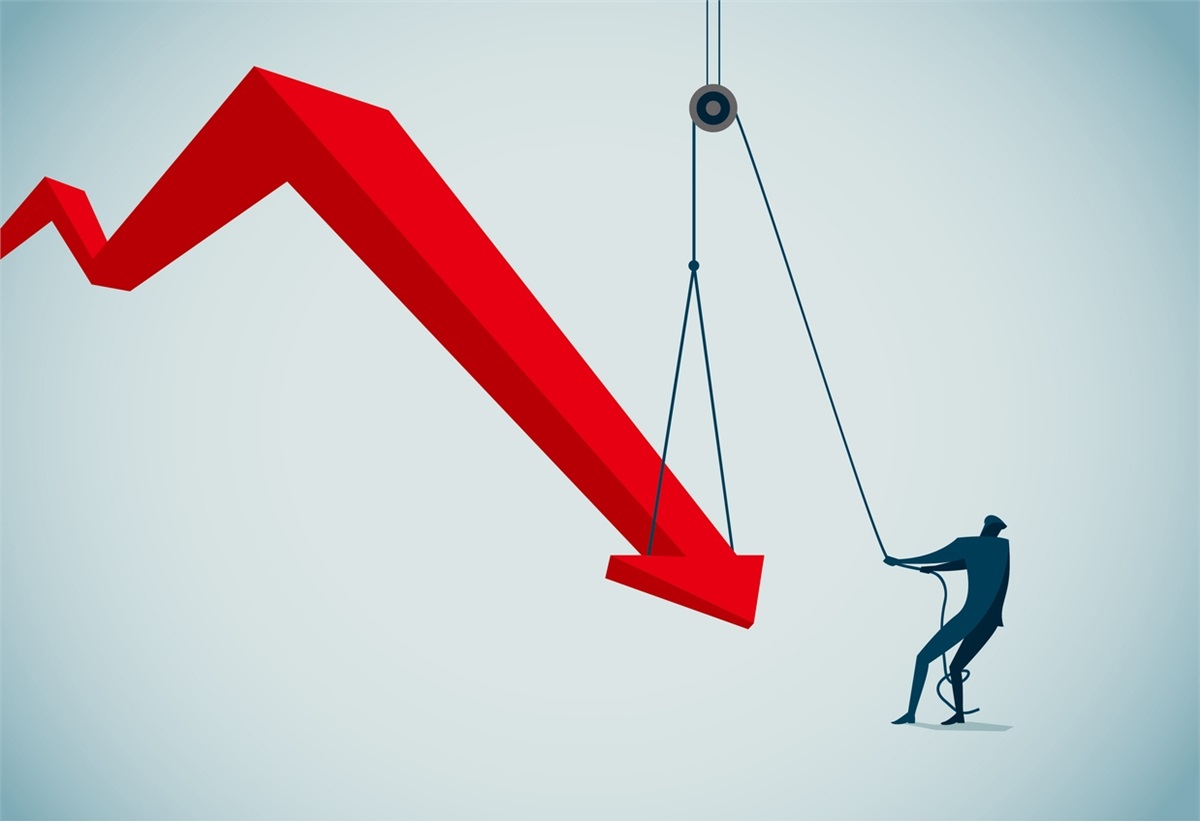 In this edition of the Windsor Perspective, we review the market performance at the close of the third quarter of 2021. In addition, we discuss current market conditions, what investors are currently focused on, and our outlook.

The third quarter of 2021 can be summed up with the phrase “what goes up must come down”. The first two months of the quarter looked to deliver very strong quarterly performance. Unfortunately, September played the spoiler, retracing the gains of the prior two months and delivering the worst monthly performance since September of 2020. 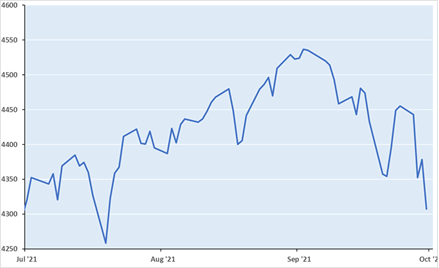 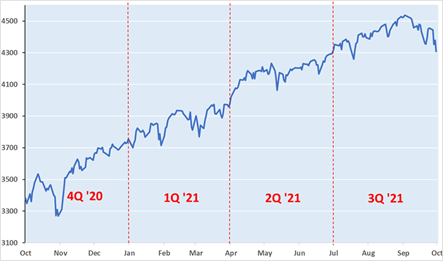 While interest rates remain at historically low levels, helping to drive strong stock market returns this year, the low interest rates have continued to be a challenge for the fixed income markets. On the international front, international equities continue to have mostly positive year to date returns, though returns for the third quarter were negative, as shown on the table at the bottom of this note.

The beginning of the quarter coincided with continued strength in the economy as opening activities continued across the globe. This was also supported by fiscal policy that was conducive to financial markets. However, as we entered September, multiple concerns began to emerge, putting a brake on financial returns. The main issues that became the focus for investors were inflation, Washington D.C and China (Evergrande default). These concerns also led to a rise in the 10-year Treasury yield at the end of the quarter, resulting in increased selling in the equity markets.

As we have written about in past Briefs, inflation continues to be one of the key drivers of the overall market. While the Fed continues to classify the current inflationary environment as transitory, and indeed we have seen some pricing retreat, the market is keenly focused on the duration of this inflation and asking is it truly transitory or is it structural. As the third quarter progressed, the inflation indicators continued to worsen, putting stress on market returns.

Inflation is a manifestation of supply and demand. There is no doubt that demand is strong across the board. However, adequate supply is hard to find. The chart below is a chart of anchored containerships in LA and Long Beach ports. This graph illustrates how the worldwide supply chain is still dislocated and shipping delays are one of the major issues in getting adequate supplies to end users. 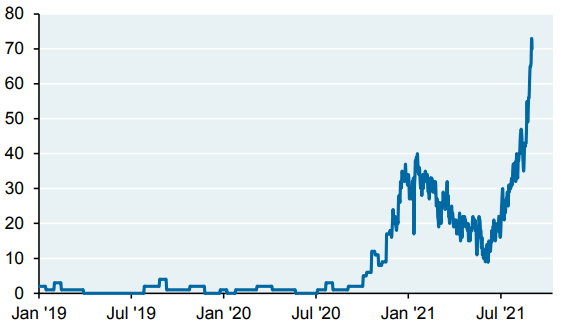 Demand for shipping is rising dramatically at the same time containerships are getting stuck in ports waiting to unload goods. This dynamic is leading to rapidly rising shipping rates, further putting pressure on inflation. The chart below shows the cost to ship a container as well as the Baltic Dry Index (the cost to ship major raw materials by sea). Both have risen quite rapidly in 2021. 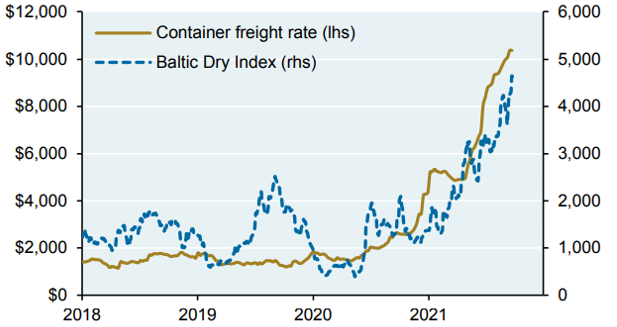 A lack of supply and higher overall costs are providing a one two punch to product pricing. These issues are being seen throughout the supply chain and could take several quarters to correct. Although the supply chain is one of the main drivers of inflation currently, wages are becoming another issue. As employers cannot find the labor they need, they are having to raise wages in an effort to fill open positions. Higher wages are ultimately passed along in higher pricing to the end consumer of that good or service, further driving inflation higher.

US small businesses with hard to fill job openings 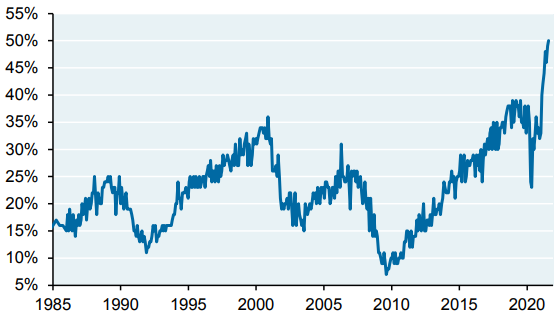 There are many other examples of increasing inflationary pressures (housing, rent, gasoline, auto prices, food prices, etc.) that we could comment on. But the simple point is inflation is looking to have longer duration than the Fed and others had initially predicted. Until we can see progress on items such as supply chain corrections and jobs being filled, inflation will stay front and center as a top concern of financial markets.

Another topic that is driving market volatility as we end Q3 and begin Q4 is the many time sensitive agenda items taking place in Washington D.C. Whether it is the debt ceiling / government shutdown, Federal Reserve Chair re-appointment, the bipartisan infrastructure bill, reconciliation bill or Fed tapering, there is a lot of noise coming out of Washington that has an impact on the financial markets. The good news is this should all sort itself out in the next couple months. The bad news is there could be market volatility as Washington works through these topics.

From a market perspective, the debt ceiling / government shutdown is the most important topic near term. The punch line is the debt ceiling will be raised imminently, through one method or another. In the meantime, there will be talk of default in the coming days or weeks. However, a default is highly unlikely. The U.S. has $4 trillion of cash flow and $350 billion of interest costs. Thus, there is plenty of cash to service debt obligations. In fact, the government has enough money to fund all debt obligations, defense spending, veterans, Medicare, Social Security, and health programs on cash flow alone. However, default is not a word the markets or investors want to hear or even consider. This is resulting in higher interest rates as investors demand higher yield due to a “higher risk” of default. 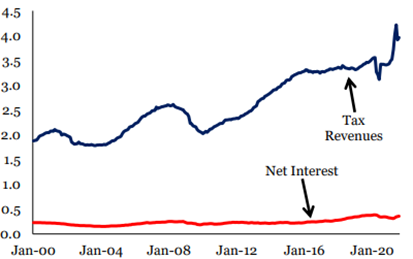 In addition, the market is susceptible to what happens to both the bipartisan infrastructure bill and the much larger reconciliation bill. From the spending that would result from these bills to the higher tax policies that would be put in place, there will be implications across the financial markets. In the interim the markets will react to the “noise” that comes from these negotiations and progress, or lack thereof, on these bills. At over $4 trillion at current levels, this clarification is important for the markets. Ironically, the spending (thus benefit) from either reconciliation bill will not fully take place for a few years. But the markets discount future actions, and therefore are very sensitive to these developments today. On the flip side, the higher tax impacts will be felt immediately.

China and the Evergrande Concern

Another major concern that cropped up in the last two weeks of the quarter came out of China. A company that most people had never heard of, Evergrande, became a topic of grave concern. Evergrande is the second largest property developer in China. Unfortunately, this company is highly levered with $300 billion in liabilities, and the company raised concerns it would not be able to make its debt payments. This roiled markets around the globe as many feared a failure on the scale of the Lehman Brothers collapse in the U.S. in 2008. As shown below, these Lehman fears were evident in the number of times Lehman was referenced in Bloomberg news articles in September. 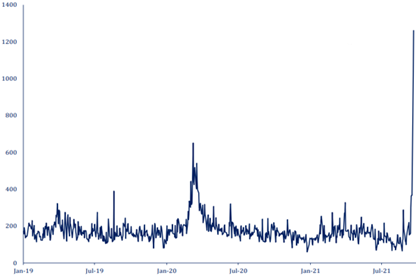 Although it looks like this risk has been greatly diminished, the concerns of a failure added significant stress to the markets. This will be a story the markets will continue to keep tabs on until it is clear this will not be a major financial collapse.

Other worries that popped up in September were rapidly rising oil prices due to strong demand, concerns of potential slowing economic growth and comments from the Fed that they may begin a reduction in its $120 B/mo asset-purchase program (the so-called Fed tapering). Combined, these issues weighed on performance in September and remain a concern entering the fourth quarter of 2021.

Where Does the Market Go From Here?

Despite the inflation concerns, near-term noise out of Washington D.C. and other geo-political issues, the overall health of the economy is still quite strong. Unemployment continues to fall, demand for both goods and services remain elevated, Covid-19 cases are rolling over once again, interest rates are still near historic lows, and depleted inventories will create demand for many quarters to come. In conclusion, despite recent market volatility and the potential for some more near-term volatility based on our comments above, we remain cautiously optimistic for the remainder of 2021 and into 2022. 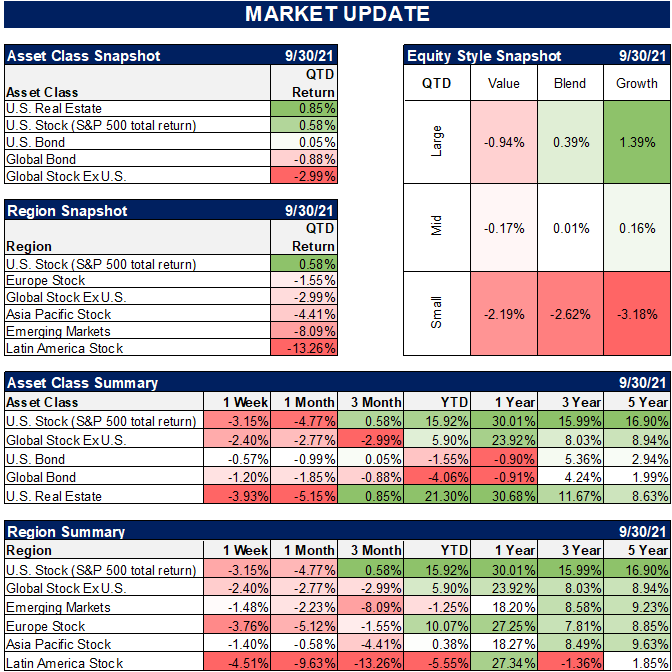