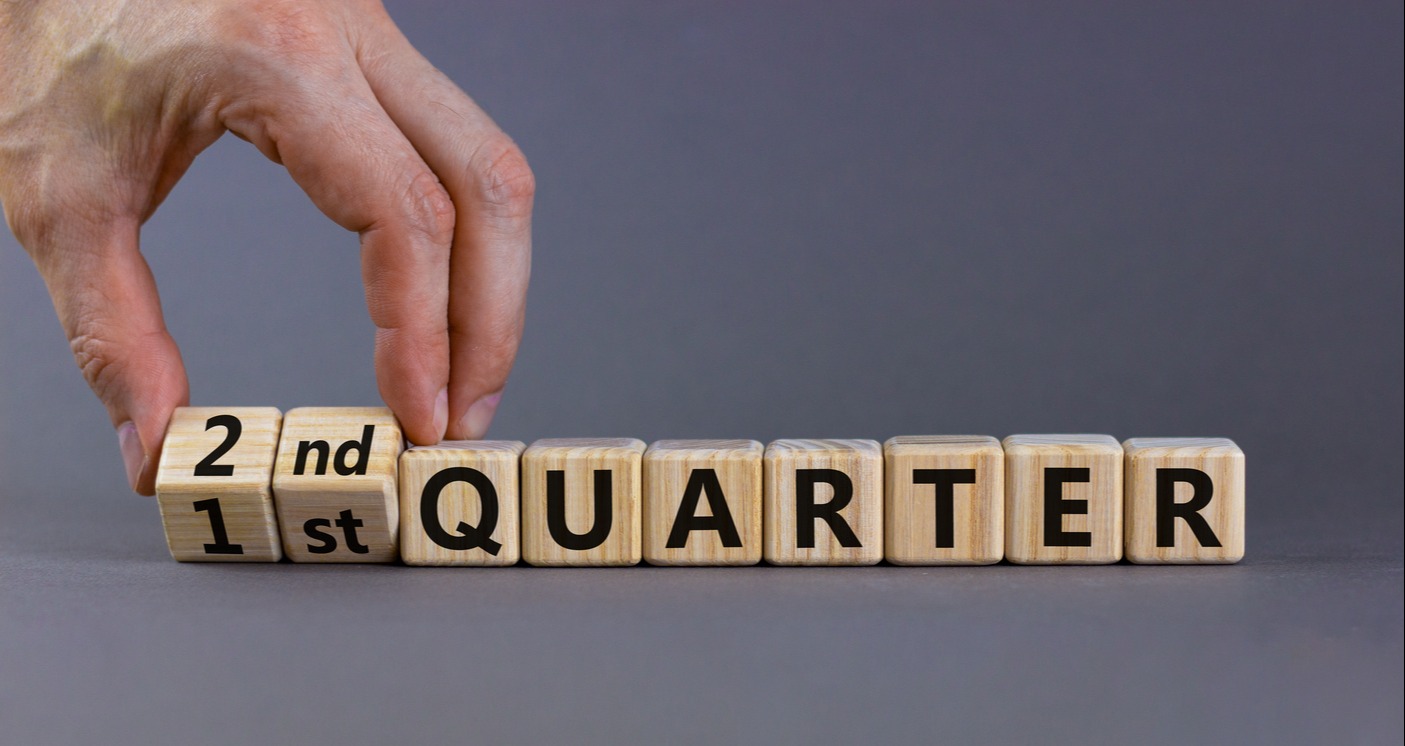 The first quarter of 2022 proved to be one of the more challenging quarters investors have experienced in the past three years, only surpassed by the first quarter of 2020 when Covid-19 was in full effect. In addition, the volatility of the market was much higher than investors have seen for quite some time. Much like the wind chill factor, this volatility made performance feel worse than the actual reading.

In this edition of the Windsor Perspective, we review the market performance for the first quarter of 2022, the outlook going forward, and discuss some of the positives and negatives of the tug of war taking place in the markets. 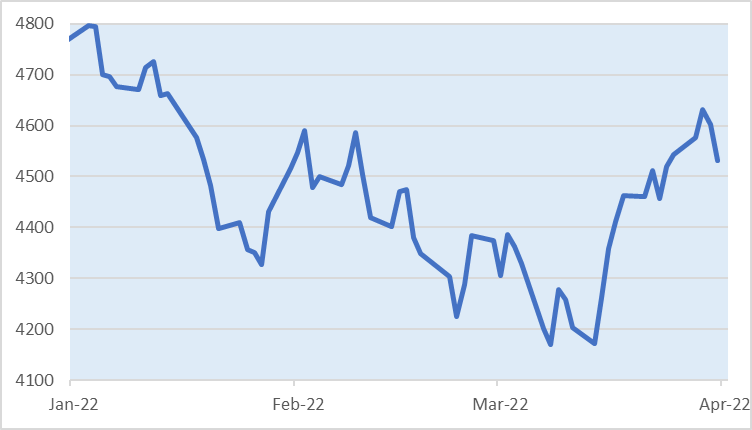 Despite the pullback experienced in Q1, the total return of the S&P 500 for the trailing 12 months is up a very healthy 15.65%. 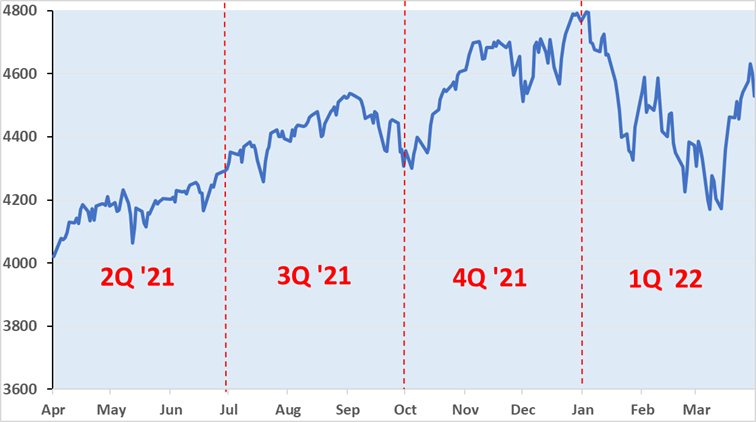 Unfortunately, fixed income was the most surprising market during the quarter. Fixed income is normally quite sleepy and there is rarely much to discuss when it comes to this steady asset class. This boring consistency is precisely the reason fixed income is a valuable part of every investor’s asset allocation. However, Q1 of 2022 resulted in some of the worst losses in years in fixed income as the market had to reset expectations for higher interest rates. As shown in the chart below, using the Morningstar US 5-10 Year Treasury Bond index as a proxy for the market, the declines in the bond market are the worst we have experienced in years. This index is down 5.7% year to date through March 22, and down 9.6% from its peak in August of 2020. The colored bars in the chart represent ranges of negative performance, as well as the duration of that performance. 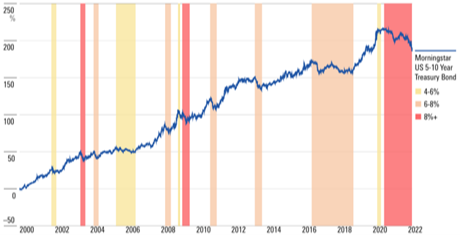 The reason for the weakness in the fixed income market has been driven by inflation and the need for the Federal Reserve (the Fed) to begin increasing interest rates. As the quarter progressed, it became clear that the Fed would have to be more aggressive raising rates due to inflationary pressures coming in higher than the markets had anticipated. Rate hike expectations had settled into a consensus view of seven rate hikes in 2022 at 0.25% each. Although the Fed only raised rates 0.25% in March as expected, as we begin Q2 the markets are now beginning to expect a potential 0.5% interest rate hike as opposed to the normal 0.25% hikes. As shown below, this has resulted in interest rate levels quickly rising this year, with levels jumping again in the closing days of Q1. 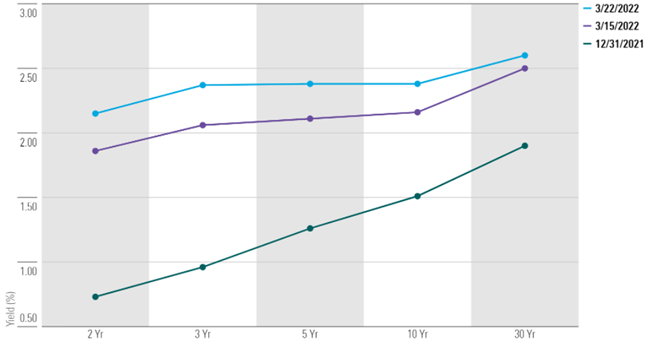 The fixed income market has rapidly priced in the increase in interest rates, impacting performance. The performance going forward will be directly tied to inflation and if the Fed must become even more aggressive than planned to fight the rising inflation levels.

Taking a step back to the equity markets, this quarter has been a true roller coaster. After a year of very low volatility, Q1 has resulted in whip lash for many investors. The market set an all-time high January 4^th, only to fall 14.2% to a YTD intra-day low on February 24, the day of the Ukraine invasion. Despite the market whipsawing nearly daily from that point on, the market was able to recover a large part of the prior losses. Like fixed income, equities were impacted by multiple variables during the quarter. The main data points the market was taking its cue from were inflation, interest rates and the geo-political event with the Russian invasion of Ukraine. As we ended January, there were signs of light at the end of the tunnel on the inflation front. Data was showing that inflation should begin to start receding later this year. However, that optimism was soon dashed with expectations of a pending Russian invasion of Ukraine. Aside from the horrible human tragedy caused by this war, the impacts of this war are being felt worldwide in the form of increased inflationary pressures. These pressures are being caused by disruptions to the world’s oil supply as well as commodity and agricultural supply out of both Russia and Ukraine. Russia and Ukraine produce a significant percentage of the world’s agricultural goods as shown on the chart below. This disruption will put significant pressure on food costs. 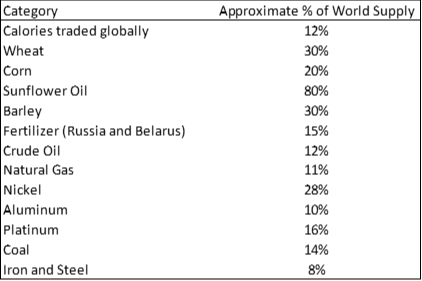 These rising commodity prices are already being felt at the gas pump. The rising prices of many of the other commodities are going to continue to trickle down to the consumer level for many months to come. These new inflationary concerns are what have prompted the Fed to become more vocal in recent days with a more aggressive tone towards raising interest rates. The markets will continue to monitor closely both the words and actions of the Fed. The clear objective of the Fed is to reduce inflation by slowing the economy, but not sending it into a recession. These new inflationary fears are causing the market to question if the Fed can deliver the desired “soft landing”.

As we enter the second quarter, there appears to be a bit of a tug of war taking place. Investors are clearly concerned about rising interest rates and their longer-term impact on the economy. At the same time, many of the market indicators are indicating that the market could rally from here, and the market has been quite resilient despite inflation, interest rates and geo-political issues. The economy remains very strong with rising corporate earnings, and the consumer continues to be very healthy. For instance, the household debt service ratio, which is a measure created by the Federal Reserve to measure the debt burden of households, remains at multi-decade lows. Low interest rates have helped this, but it is also a function of manageable levels of leverage, relative to wage income. As seen in the chart below, much higher levels of leverage are typically seen prior to recessions. 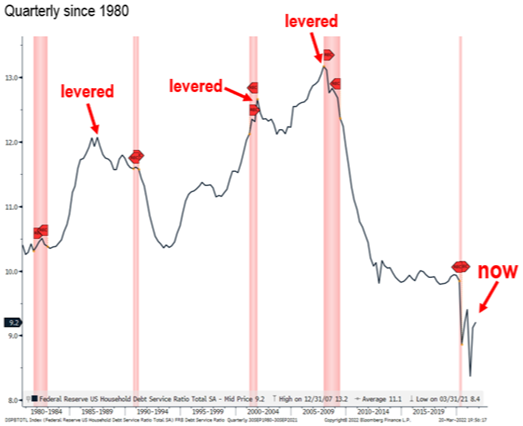 This low leverage rate is resulting in excess savings as a percent of household income. An analysis by Goldman Sachs shows that the bottom two quintiles of income have excess savings of 13% to 14% of income, which is actually higher than that held by higher income households. This will help to partially offset higher inflationary pressures. 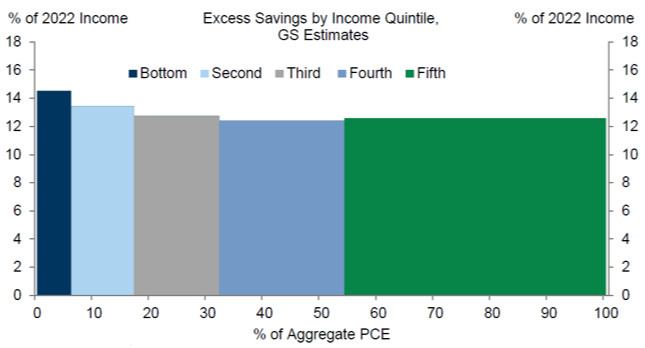 In addition, unemployment remains at very low levels while job openings remain very elevated (over 11 million currently), neither of which is indicative of an impending recession. This low unemployment combined with rising wages has allowed the consumer to return to pre-pandemic travel levels, dining out levels, spending levels, etc. All signs of a healthy economy. Despite the Fed raising rates, historically this is not a bad thing for the equity markets, with the market making gains in nearly all rate hike cycles back to 1954, and every time since 1977. This is very compelling data for the direction of the market from here.

When the Fed has Raised Rates, the Market has Mostly Moved Higher 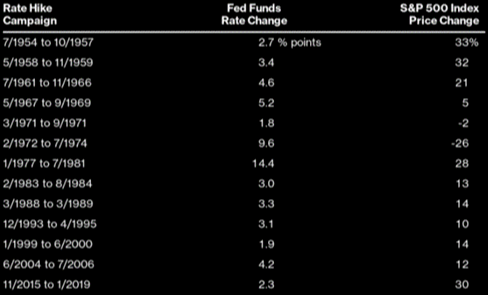 However, despite all the positives, there are negatives to be aware of. First and foremost, is the yield curve. The yield curve (a chart that plots the yields (interest rates) of bonds having equal credit quality but differing maturity dates) is a closely watched barometer of an impending recession. Specifically, an inverted yield curve (meaning the yield on the 2 yr Treasury Note is higher than the yield on the 10 yr Treasury note) has been a very accurate indicator of a future recession. If the yield curve inverts, on average, a recession will occur in approximately 18 months (the historical average). As of this writing, the yield curve is on the verge of inverting, and may have done so by the time this is being read. This would be a negative sign for the economy with an increased risk of recession in mid to late 2023 (18 months from inversion). As the chart below shows, when the difference between the ten-year and the two-year Treasury yield goes negative (an inverted yield curve) a recession (the gray bars) typically occurs with a lag.

Other negatives include the lingering war in the Ukraine, the inflation overhang, and the risk of future waves of Covid, to name a few.

Aside from historic precedent on what happens when the yield curve inverts, the other listed negatives are more about unknowns. Nobody knows how the war will ultimately resolve itself or what Covid-19 will do in the future. The outcomes could be very positive (if the war ends peacefully and quickly), or negative if other outcomes occur. The one thing history has taught us is it is important to follow your investment plan and not get swayed by emotions. All data shows missing just a few of the strongest positive days in the market can significantly impact your long-term returns. It is truly more about time in the market than timing the market. 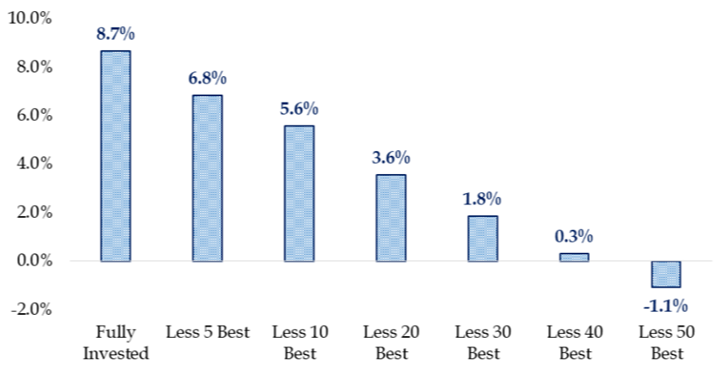 The first quarter of 2022 was challenging from a performance perspective, with both equities and fixed income markets delivering negative returns. Looking forward, there are many puts and takes, resulting in a bit of a tug of war in the market. This tug of war has resulted in increased volatility in recent weeks. We will continue to monitor economic data, watch the yield curve, monitor both commentary and actions from the Fed, and track inflationary pressures going forward to assess the direction of the economy. Currently, we believe the economy is healthy and see the opportunity for positive market gains in 2022 if the Fed can successfully implement their interest rate policy. 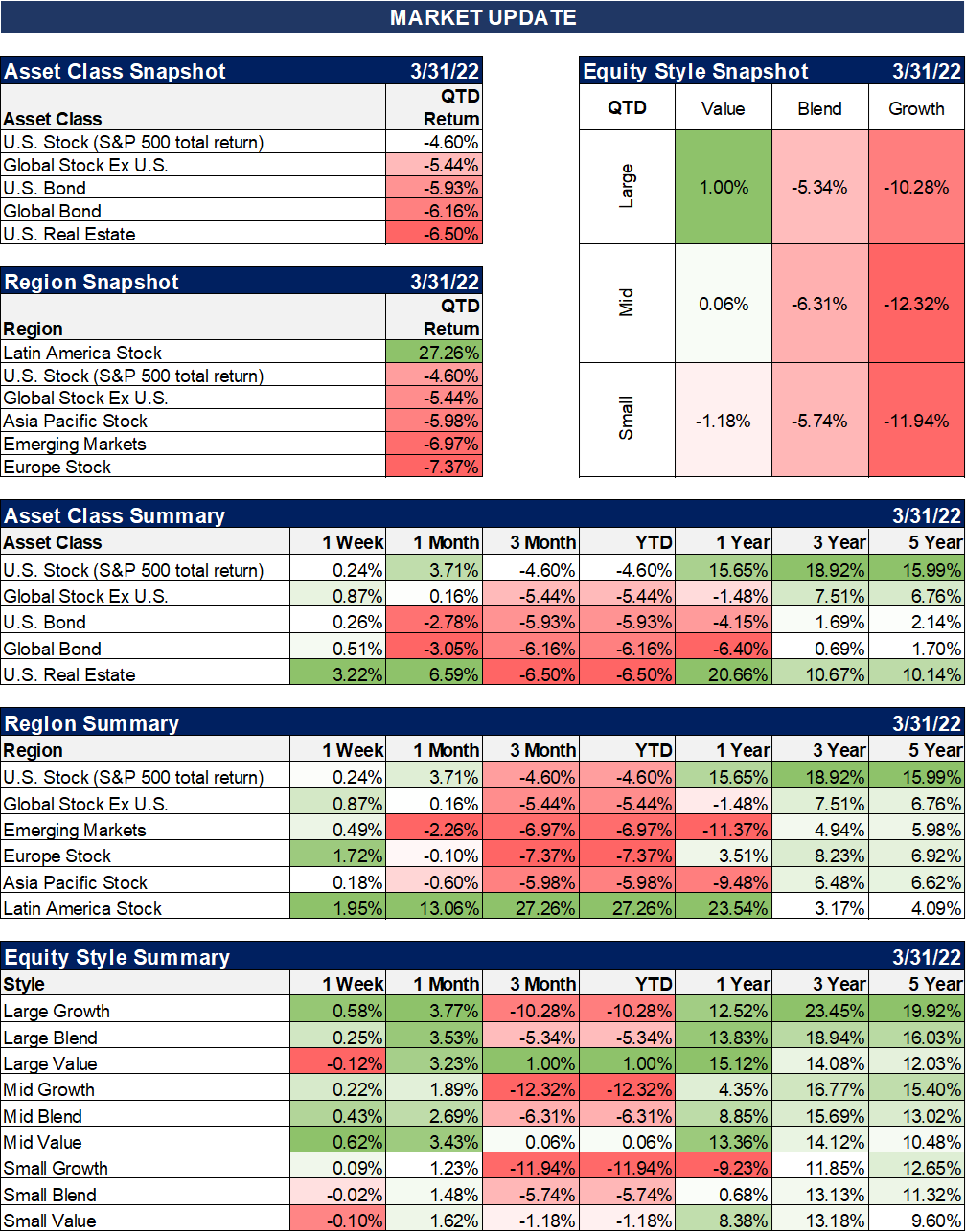