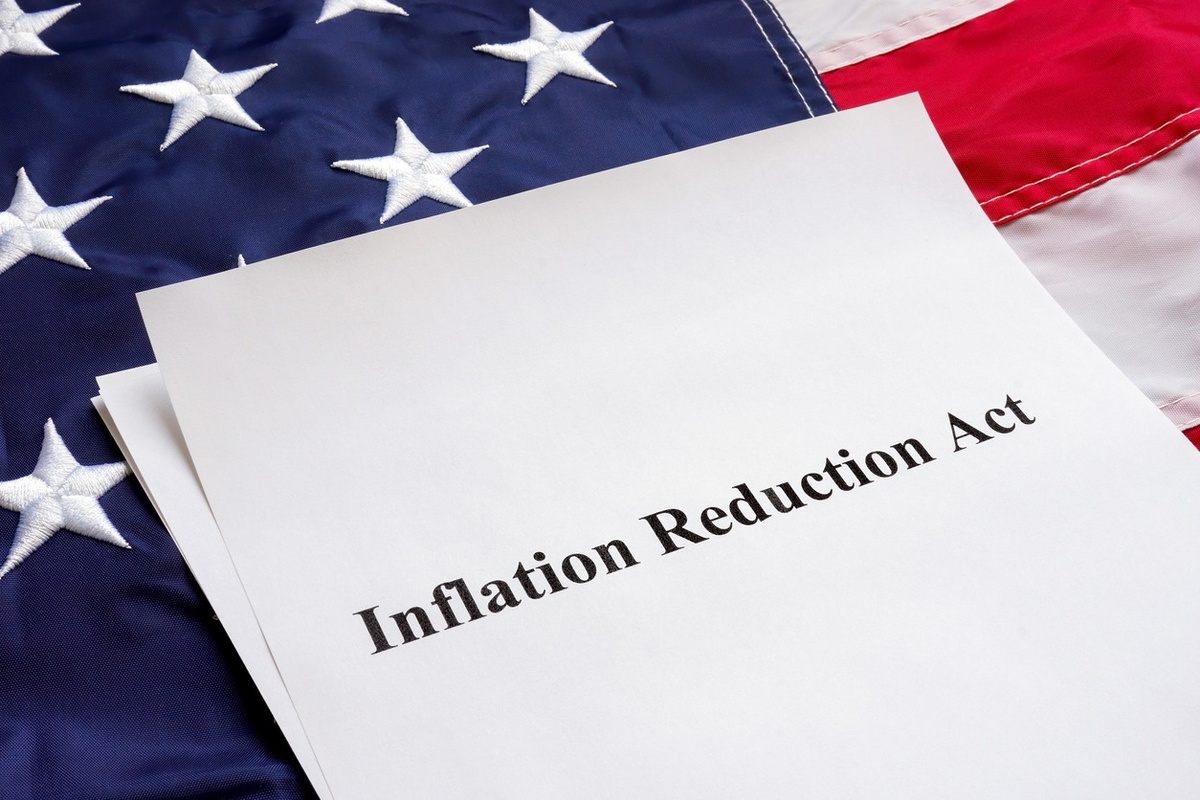 This month’s Windsor Brief discusses the recent market activity for the month of August, what were the drivers of performance and what this may mean for the future.

Our Financial Planning section discusses the Inflation Reduction Act which was signed into law on August 16, 2022. There are several provisions in this new Act that will apply directly to individuals, and we go through what this may mean for you.

The month of August was a bit of a roller coaster for the S&P 500 in terms of performance, ultimately finishing down 4.08%. The S&P 500 had a positive return of 17.7% from June 16th to August 16th. Unfortunately, the rally fizzled out and from August 17th to month end, the S&P 500 declined 8.05%. Although a slight pullback would be appropriate after such a run, this pullback was a bit larger than one would normally expect. What happened to cause this decline?

As we have mentioned multiple times in our monthly letters, the main market driver right now is inflation and the Fed. For various reasons, the market has struggled this year to anticipate the Fed’s reaction to inflationary readings. Through the first six months of the year, every time the market thought they knew what the Fed was contemplating for interest rate increases, it was surprised by a much more hawkish Fed. This hawkishness was driven by inflation that continued to rise quicker than anticipated which in turn required the pace of interest rate increases to accelerate. This ultimately drove the market to make a low on June 16th. It was then that the market and the Fed seemed to finally get on the same page for interest rate increases for the remainder of the year and beyond, resulting in the market rally mentioned above. Although the markets began to pullback slightly in mid-August after the 17.7% rally, a case of Déjà vu occurred on August 26th when Fed Chairman Powell gave a
speech in Jackson Hole Wyoming at the Economic Symposium. He had an unexpectedly hawkish tone in what appears to be an attempt to refute any doubt in the market regarding the Fed’s willingness and desire to continue to raise rates into 2023. This tone stands in contrast to the dovish sentiment expressed in the most recent Federal Open Markets Committee (FOMC) minutes. Once again, the market was caught off guard by the hawkish stance and the result was weakness in the stock market as it appears the Fed may be aggressive with rates for a longer timeframe than the market had expected which increases the prospect of a recession.

Despite the market weakness following Powell’s comments, we do not think much has changed in terms of the path of anticipated interest rates. Interestingly, the market implied year end Fed Funds forecast only increased marginally, unlike in June when Fed comments resulted in a 90-basis point increase.

In essence, there was no impactful shift from this speech in how the markets see Fed policy being conducted through year end. What has changed is there is now more speculation and uncertainty regarding how long the Fed will continue to raise rates and how long they will maintain rates at an elevated level. The market fully expects the next interest rate increase to be 50 – 75 bps, unchanged from prior to the speech. The market concern really is what occurs in 2023 and beyond. Overall, this was a Fed reinforcing the image they are serious about fighting inflation, and a stock market that reacted to the unexpected hawkish comments. The Fed remains committed to slowing the economy to bring down overall demand which should significantly curtail inflationary pressures in the system. But once again, the market and the Fed appear to remain on the same page when it comes to the path of interest rates going forward which should give the markets comfort over time as it grapples with the risk of a
recession from the interest rate cycle.

More importantly, as mentioned in prior Windsor Briefs, inflation continues to look as if it has peaked and is slowly coming down. It will take well into 2023 to get inflation levels back near the 2% range, but it appears we are on the right glide path. As shown below, the month over month CPI number in July was negative and was a dramatic drop from the prior two years, all of which have been positive. We would expect future month over month numbers to also remain subdued, leading to continued gradual drops in the annual CPI readings. 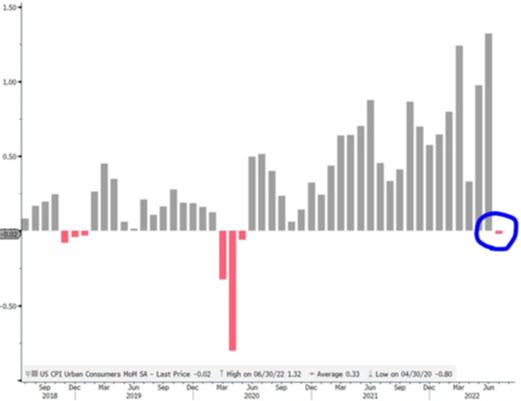 In conclusion, August was really the tale of two cities. The first half of the month experienced the continued positive market run that began in June. However, after approaching a nearly 18% bounce off the prior low, the market decided to take a rest in mid-August, giving back a little of the gain. Unfortunately, a very hawkish Fed speech resulted in a rapid drop the last five trading days of the month. This speech was really an attempt by the Fed to maintain credibility as inflation fighters and to prevent the markets from becoming lackadaisical in their view of the path of interest rates. Overall, the markets and Fed remain in alignment as the implied Fed Funds rate only moved up marginally post the speech and there is no real change to the outlook for interest rates. Inflation continues to moderate, and the economy remains relatively healthy. The main outstanding question the market is struggling with is how serious of a recession will we experience as a result of the interest rate
increases. Despite the recent market activity in August, we remain cautiously optimistic as we enter the last few months of 2022.

On August 16, 2022, President Biden signed into law the Inflation Reduction Act (IRA). This Act contains several provisions for fighting climate change and reducing the deficit. A new corporate alternative minimum tax of 15% of financial statement income will apply to the biggest companies with income over $1 billion. Corporate stock buybacks will now be subject to a 1% excise tax.

The Inflation Reduction Act also contains provisions that will apply directly to individuals. These provisions are summarized below:

The above is a summary of the key individual provisions of the Inflation Reduction Act. As with all legislation, there are additional details and limitations provided within the actual law. Please let us know if you have any questions. Windsor will continue to keep you updated on new laws that may affect your financial planning. 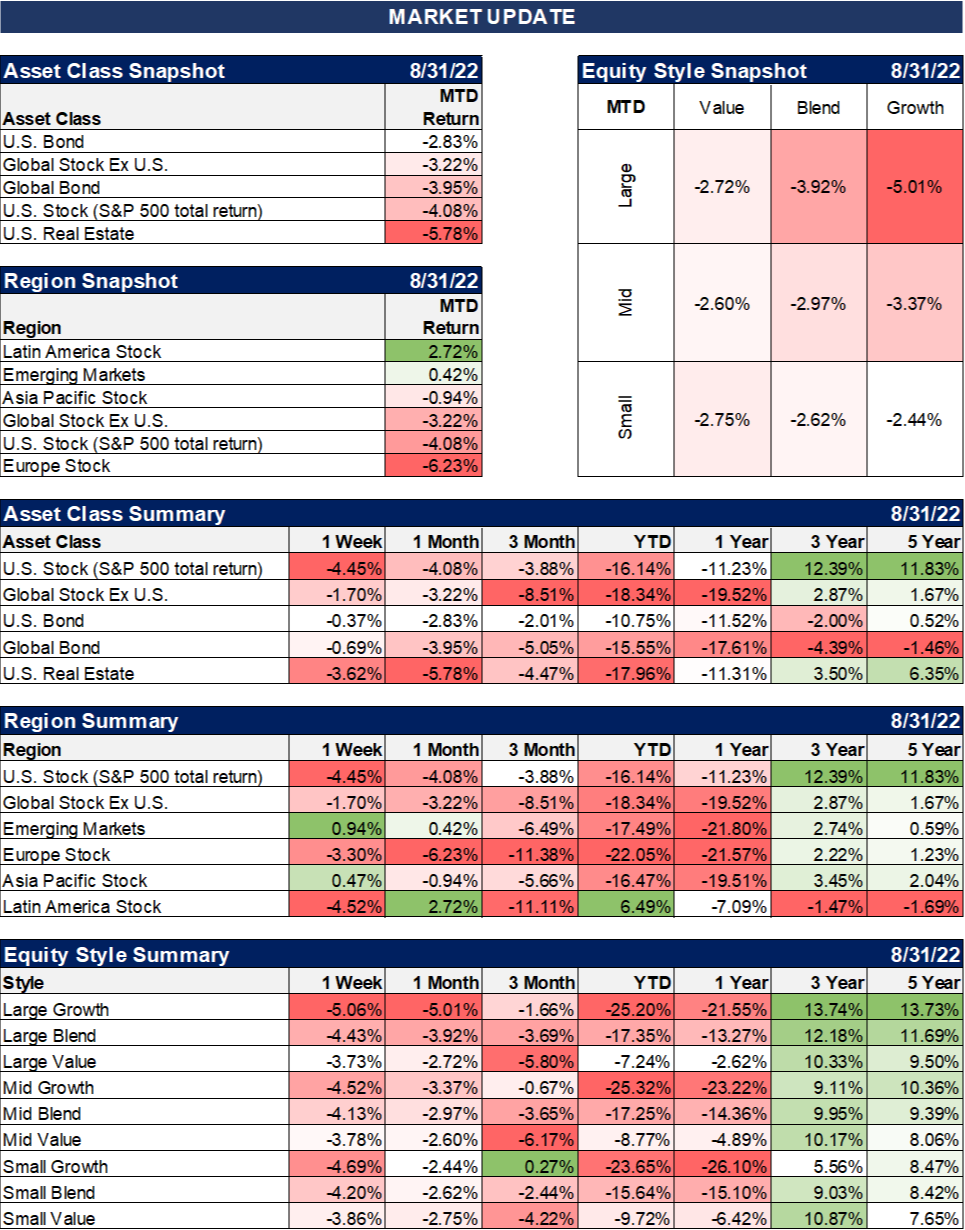