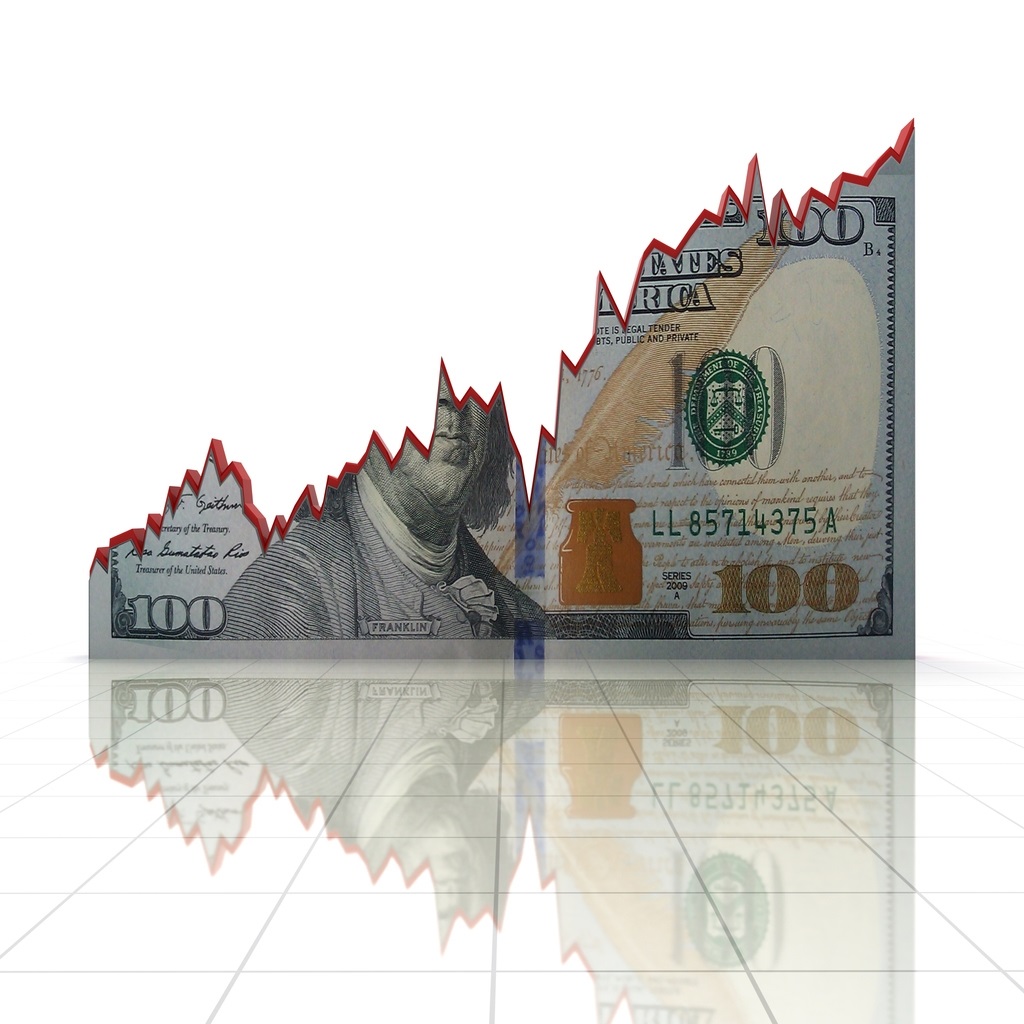 As we prepare this month’s Windsor Brief, the U.S. Government is preparing for additional spending. The Senate recently approved a $1 trillion infrastructure deal that includes $550 billion in new spending, while Congress just approved an additional $3.5 trillion spending package. To be clear, neither of these bills are fully approved and the larger $3.5 trillion package will most likely have to go through downward revisions prior to final approval. However, the point is spending will be going up as will the U.S. debt level. Below, we discuss why the debt levels may not be as big a worry as one may think.

Our financial planning section is part 2 or our discussion on revised retirement account beneficiary options. Last month we discussed how changes from the SECURE Act could impact beneficiaries in the future. This month we continue that discussion with two planning options for your beneficiary designation.

Investing: Is surging U.S. debt sustainable, or will it spin out of control?

It’s a question many are asking. U.S. government debt is on a sharp upward trend, and current policy proposals suggest that will continue. The recent passage of a $1.9 trillion pandemic relief package has helped drive the trailing 12-month federal deficit to 18.6% of gross domestic product — the largest shortfall since 1945. This will almost certainly push Uncle Sam’s public debt above the World War II‒era peak of 106% of GDP. 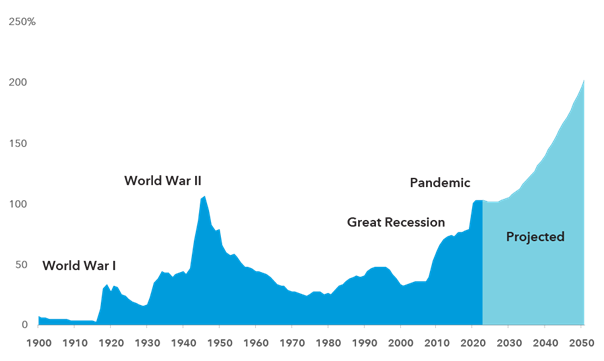 Source: Congressional Budget Office as of March 4, 2021. Federal debt held by the public. Long-term forecast excludes the impact of the American Rescue Plan Act of 2021 and assumes no meaningful changes to current laws affecting U.S. government revenues and spending.

While we are moving into uncharted territory, there are many factors that can influence whether — or when — this debt will ever become a real problem. Looking from the perspective of a glass half full, here are four reasons why the federal debt could be manageable for the foreseeable future.

Many economists believe that debt crises arise when the debt-to-GDP ratio crosses 100%. Above that level, the debt stock can begin to spiral upward by itself, even without further additions from ongoing deficits. Italy and Greece are the most recent examples of this phenomenon. U.S. debt is currently crossing this threshold.

However, this debt-spiral math only works if a country’s interest rate is higher than its growth rate. As long as the nominal interest rate on the debt is less than the nominal growth rate of the economy, the upward spiral can be avoided. That is the situation in the U.S. today, and it is likely to remain the case for the foreseeable future.

During the 1960s, nominal growth regularly exceeded the interest rate on 10-year U.S. Treasury bonds, but that flipped during the 1980s and into the 1990s as inflationary pressures drove interest rates sharply higher.

In the 2000s, the relationship reverted, although at lower levels of nominal growth and higher levels of government debt relative to GDP. Looking ahead, this suggests that the biggest risk could be a sustained surge of inflation that drives interest rates well above the GDP growth rate. 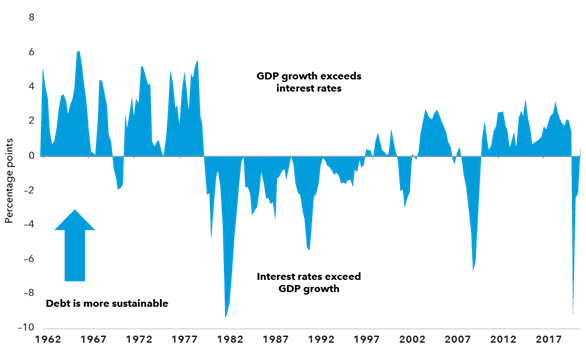 Sources: Bureau of Economic Analysis, Federal Reserve, Refinitiv Datastream. As of March 31, 2021. Chart displays the difference in percentage points between the year-over-year growth rate of nominal GDP and the nominal 10-year U.S. Treasury yield on a quarterly basis since the first quarter of 1962.

2. The U.S. fiscal position is worsening but is not an outlier relative to other countries

The COVID-19 pandemic has accelerated rising debt trends around the world, not just in the U.S. Many countries took aggressive fiscal and monetary policy actions to soften the economic impact of widespread lockdowns last year.

The U.S.’s debt-to-GDP ratio has risen sharply since just before the global financial crisis of 2008–2009, but it still trails Japan’s by a wide margin. The U.S. debt burden is not far ahead of those of the U.K. and the eurozone. China and other emerging markets have lower ratios but have also seen significant increases. From the perspective of sovereign debt investors, that means the U.S. is not a significant outlier in terms of debt sustainability.

Debt rising around the world: Gross government debt to GDP 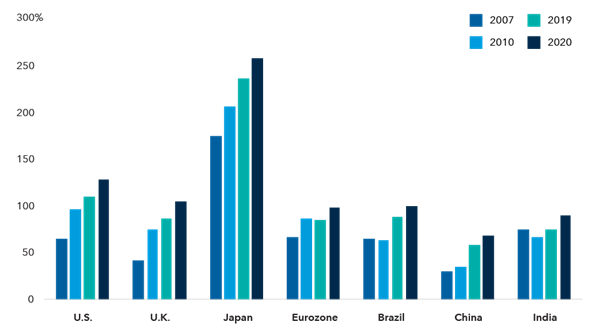 America’s relative position is also enhanced by the privileged status of the U.S. dollar as the global reserve currency, which creates a significant level of built-in demand for U.S. Treasury debt and other dollar-denominated assets. The U.S. Treasury market enjoys safe-haven status in periods of market stress, owing to a perceived low risk of default. Many assets, including most commodities, are priced in dollar terms and U.S. Treasuries remain the “risk-free” asset against which most other assets are priced. These attributes support demand for U.S. government bonds, which in turn helps support the debt burden.

3. Governments have various levers to pull

The textbook solution for a country running large deficits and a rising debt burden is to raise taxes, cut spending or both. In the near term, while individual and corporate tax rates may go up modestly, government spending is likely to increase as well. This does not necessarily have to be negative for the deficit, however. To the extent that the U.S. economy sees higher levels of productivity and innovation as a result, it could boost growth, and thus tax revenues. This is not all that difficult to imagine in an era of rapid technological change. There may even be innovations coming out of the pandemic that lead to improved productivity and growth, making the debt burden more manageable.

One alternative economic theory that has received some attention amid the surge in U.S. debt is Modern Monetary Theory. MMT posits that most countries that issue their own currency face no financial constraints. Thus, for many governments — including the U.S. — there is no risk of default. Governments can decide what they need to spend as their first priority, and then address financing through taxation and borrowing. There are limits to debt levels, but those levels are tied to inflation. As noted by economist and MMT advocate Stephanie Kelton, inflation is evidence that a deficit is too big, while unemployment is evidence of a deficit that is too small.

Finally, there is the Federal Reserve. While the goals and policies of the central bank have evolved since its founding over 100 years ago, the current monetary policy framework has shifted to an explicit inflation target and maximizing employment. The Fed’s recent move toward average inflation targeting, plus its signals that low policy rates and asset purchases will remain in place, support higher nominal GDP growth and low interest rates, a dynamic that makes the level of federal debt more tenable.

The 2008 global financial crisis was the first time that many people had ever heard of the Fed using its balance sheet to support large asset purchases. But the practice of buying U.S. government securities as an instrument of monetary policy dates to the 1920s. Following World War I, Benjamin Strong, then head of the Federal Reserve Bank of New York, did so in an effort to stem a recession in 1923.

During World War II, the U.S. Treasury directed the Federal Reserve to target short- and long-term interest rates through the purchase of U.S. government bonds as a means of financing the war effort.

Fast forward to Ben Bernanke, who became Fed chair in 2006. His legacy is defined by the Fed’s actions to stabilize the financial system and the economy during the financial crisis. The Federal Reserve purchased billions of dollars of U.S. Treasury and mortgage-backed securities. This quantitative easing may have been new to many market participants, but it was already part of the Fed’s playbook.

There is no reason to think that U.S. monetary policy will stop adapting to the changing circumstances of the U.S. and global economies. As a result, it is useful to keep an open mind regarding potential approaches and regime shifts. For instance, a large balance sheet at the Federal Reserve could become a fixture for many years to come. This should not be underestimated as a policy tool with the capacity to absorb sizable government debt issuance.

Bottom line: The outlook may not be so dire

The response by the federal government to the COVID-19 pandemic has taken us back to levels of debt not seen since World War II. While the level of government debt is high, it is elevated in other mature economies as well.

The fact is that a debt crisis arises when investors are no longer willing to purchase a country’s debt. When that will occur is very difficult to predict, although it does not seem likely to happen in the U.S. anytime soon. Traditional analysis suggests that debt levels are sustainable as long as the cost of debt remains below the level of economic growth, but there are still likely limits. What they are, however, is unclear.

Markets can act as a signaling tool in this process, which in turn can influence political choices and the role played by the Federal Reserve. The economy can also change, with technology and new behavior driving innovation and improved productivity. Suffice to say that there are many forces that can influence the path of debt, and the federal response to it, going forward.

Source: Adapted from The Capital Group

Last month’s Windsor Brief included a summary of the changes to beneficiary distribution options brought about from the SECURE Act of 2019. These changes apply to anyone inheriting an account starting in 2020. Most non-spouse beneficiaries are no longer eligible to stretch the retirement plan distributions based on their own life expectancy and must now settle for a 10-year distribution period.

In some cases, a retirement plan owner may not think that a 10-year time horizon is prudent. This could be due to a situation with the beneficiaries (future lawsuit, potential divorce, maturity level or addiction issues) or just due to the preference of the account owner. As promised, this month’s Windsor Brief will look at 2 planning options for your beneficiary designation.

The first step is to review your beneficiary designations for all your retirement accounts to make sure they accurately reflect your wishes. Windsor will be happy to assist you in this review process. Please let us know if you have any questions.