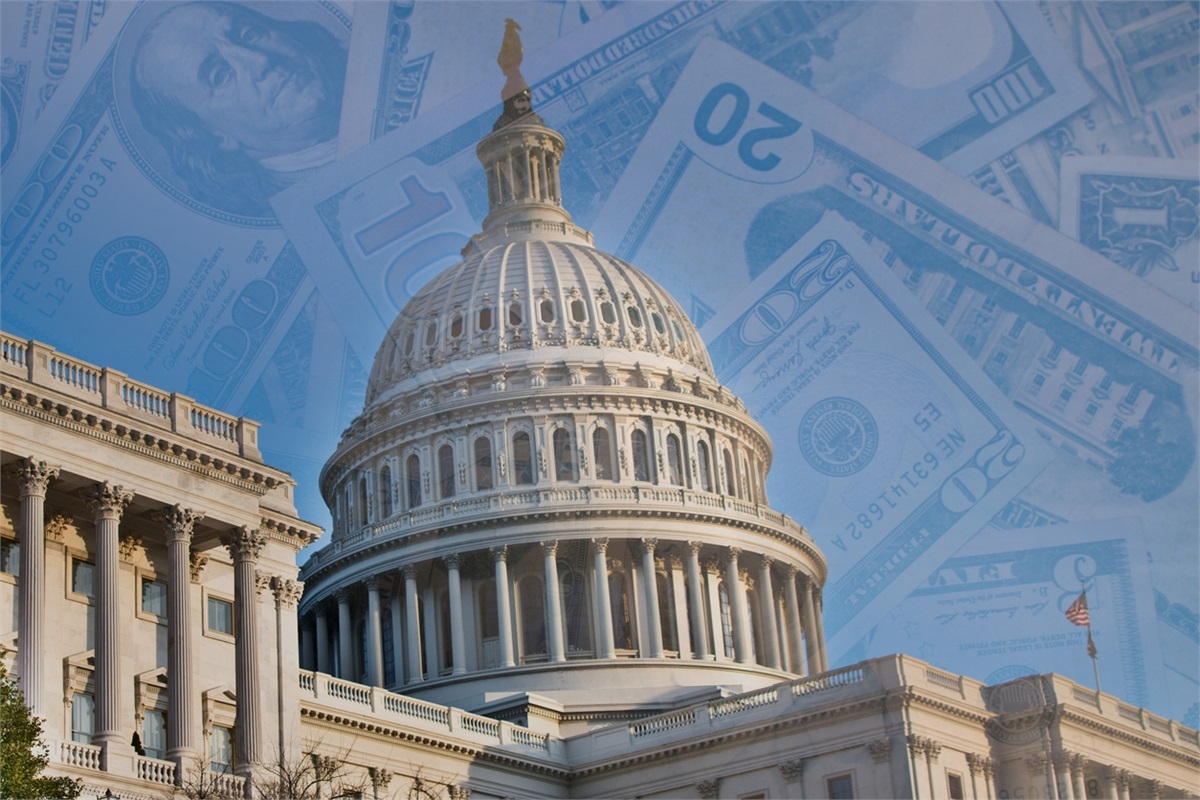 Investing:Reconciliation bill, Infrastructure bill, and inflation
Planning:What do we need to do now?
Market Snapshot

This month’s Windsor Brief is focused on three topical and important issues facing investors as we enter the final months of 2021 and begin to focus on 2022. First, investors are anxious to learn what the spending and tax ramifications will be from the $3.5 trillion Reconciliation bill. Second, what will the fate of the Infrastructure bill be and when will that begin to contribute to the economy. Last, we touch on a recurring theme, inflation, and its duration.

Our Financial Planning section will look at what we do now as we await the final terms of the Reconciliation bill.

As October comes to and end and November begins, Washington D.C. has been a busy place as there is a major focus on bringing a resolution to the $3.5 trillion Reconciliation bill and the Infrastructure bill. As we (re)write this article, we know the revised proposal will target closer to $1.75 trillion. This significant cut to the original number is resulting in significant discussions and deal making in Washington as law makers try to figure out what remains in the bill, what is eliminated, and what is scaled back. 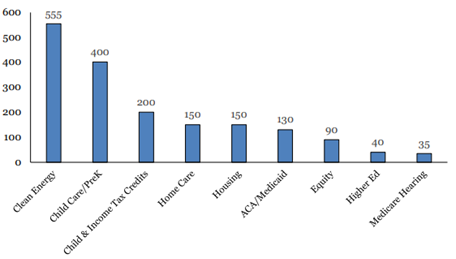 What the bill ultimately looks like and what taxes are increased have become moving targets. As of this writing, Washington is still negotiating what different taxes could be implemented. Historically, translating new tax ideas into real policy action is not easy. For example, two new tax ideas to have gained traction in the past week are: 1) An unrealized capital gains tax and 2) A corporate alternative minimum tax of 15%. Based on what we now know, the former most likely will not be implemented while the latter has gained strong support. The 15% corporate ATM would apply to large corporations. The bill also includes the 15% minimum global tax favored by Treasury Secretary Yellen. Another tax gaining steam is a 1% buyback tax on corporations. This would impact stock buybacks but would be beneficial to paying dividends in lieu of buybacks. In place of the unrealized capital gains tax, we could see a surtax on income on the very wealthy individuals (income over $10 mm) along with strengthening IRS tax enforcement. 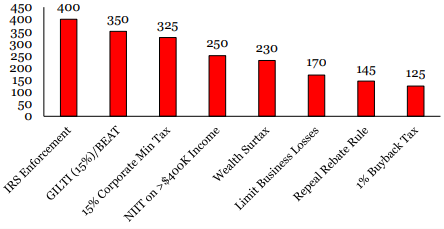 Tax increases on individual income taxes, capital gains and dividends are under heavy scrutiny as well, and it appears they will not be implemented unless income is over $10m. These tax increases may be replaced by reinstating the Alternative Minimum Tax (AMT) on individuals. Reinstating the AMT would raise roughly the same amount that the income tax, capital gains and dividend tax increases were targeted to raise. In addition, some version of SALT deductions may be reinstated, benefitting individuals in high tax states. There are a few different IRA and Roth IRA topics that have been discussed but were not included in the most recent proposal. An additional topic under discussion is the ban on private securities in IRA accounts and we will keep an eye out to determine if it will be in the final proposal. The estate tax and cost basis step up is another important tax topic. As of now, it does not look like any significant change will be implemented. 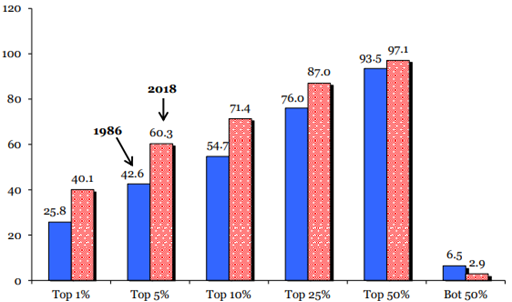 The bottom line is there are a lot of moving parts on taxes that we will be learning in the coming days. We will be closely following these developments and how they may impact our outlook. In addition, the passage of the Infrastructure bill, which is being tied to the Reconciliation bill, will have implications for the overall stock market, as this will result in spending over the next 10 years. The passage of this bill would be received positively by the market.

As inflation is a very important topic and has significant ramifications for the economy and markets, we wanted to keep you updated on what we are seeing. Although inflation remains high, there is mounting evidence it may indeed be transitory. To be clear, transitory could mean heightened inflation for another 12 months or so. But there appears to be a path to normalized inflation towards the end of 2022. We are already seeing inflation pull back in certain areas, such as lumber, as inventory gradually becomes more available. In addition, there is evidence the supply chain is seeing the first signs of recovery. Also, labor looks to be improving with jobs being filled, a clear positive. 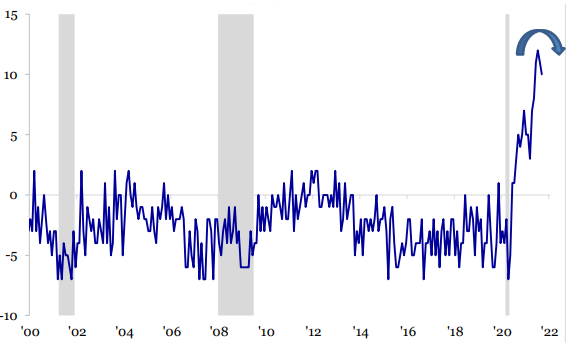 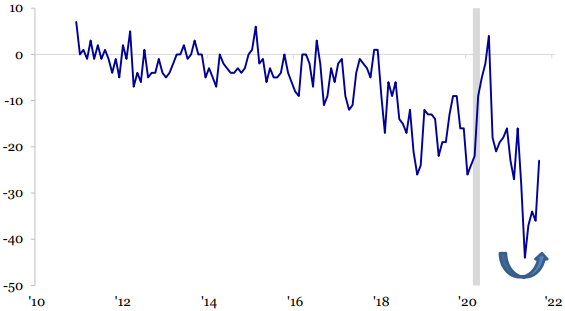 Likewise, the bond market is not indicating fear of long-term inflation as the 10-year Treasury, while up, is only 1.54% at the time of this writing. This rate does not support hyperinflation. We still have a long road ahead of elevated inflation at a minimum. But, there are increasing signs of more normalized inflation as we look out a year ahead. We will be watching closely for changes and data on where inflation will ultimately shake out.

Planning: What should we do now?

As we review the proposals being discussed in Washington D.C., it is natural to wonder what steps should be taken now before the proposal may go into effect. We generally do not recommend making hasty irrevocable changes based on a proposal. As we have witnessed over the last few months, the current proposal is much less dramatic than the original Biden plan or even the Build Back Better proposal of only a month ago.

A few items that appear to be out now include items that are set to sunset after 2025. Why waste the political power on items that are scheduled to change anyway? The higher 39.6% marginal tax rate and lower $6m estate tax exclusion amount may not become effective until originally scheduled to sunset in 2026. That does give us additional time for planning for these changes.

We recommend reviewing your estate planning documents. Are your distribution goals reflected accurately in these documents? If you are projected to be subject to estate taxes, we can discuss strategies to reduce your exposure or redirect to the charities of your choice.

What do we do now? We continue to recommend sound financial planning based on your Needs, Wants and Wishes. While we may recommend different strategies or opportunities based on the law of the land, the sound aspects of your financial plan will remain true. Please let us know if you have any questions on how the new proposals may affect your personal financial scenario. 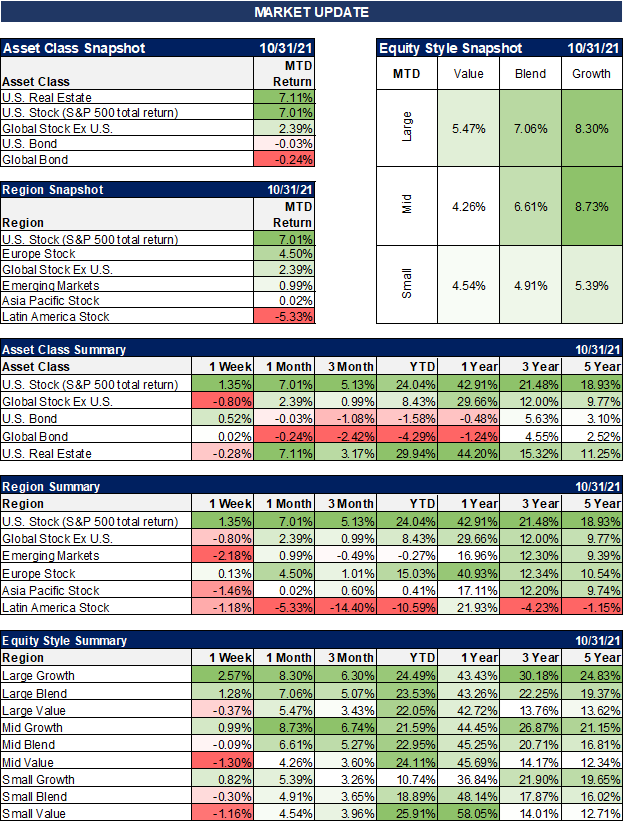