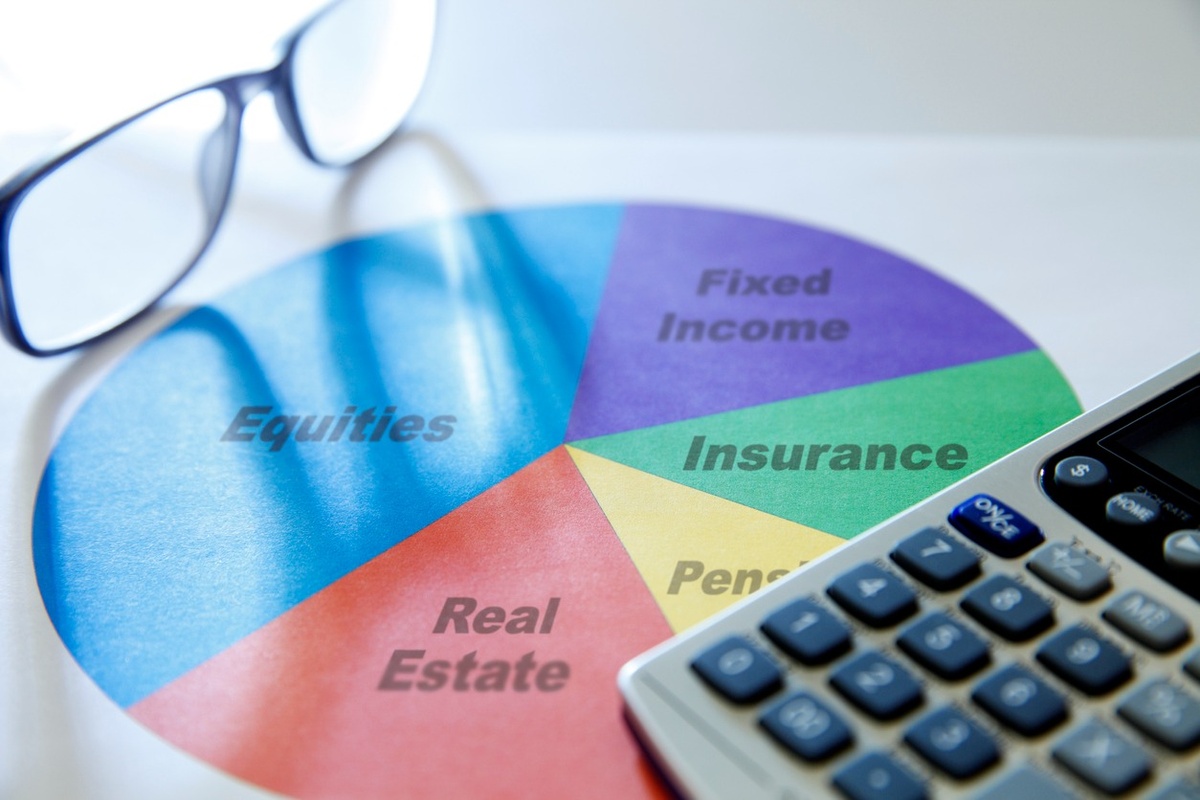 This month’s Windsor Brief looks at the fixed income and equity market activity in April, what drove it, and where the markets could go from here.

Our Financial Planning section this month discusses the benefits of tax diversification during retirement and how a Roth IRA fits into this mix.

The month of April delivered continual bad storms, not just simple rain showers. For the month, the S&P 500 total return was -8.7%, while the widely followed Bloomberg Aggregate, a proxy for fixed income, was down 3.8%. In addition, both the fixed income and equity markets are experiencing a very tough 2022, with fixed income having the worst start to a year in 40 years while the S&P 500 had the worst January-April period since 1939.

The modern design of the S&P 500 Index was first launched in 1957. Performance before that incorporates the performance of its predecessor index, the S&P 90.

Stock market volatility has been driven by several factors since the beginning of the year. Inflation, the main driver of market performance year to date, started the year at elevated levels. However, there was light beginning to show at the end of the tunnel that inflation would begin to moderate by late 2022. The market was monitoring the Federal Reserve (the Fed) closely for the path of rising interest rates to battle this inflation. Through most of the first quarter, the Fed had a more hawkish communication style, but there were no signs of panic. Unfortunately, the invasion of Ukraine resulted in a second wave of unexpected inflation in the energy, commodity, and agricultural areas. These categories have pricing impacts across a broad swath of the world’s economy. In addition, China began a new round of aggressive lockdowns in an effort to fight increasing cases of Covid-19, further disrupting supply chains. These new inflation clouds soon resulted in large storms in April, as the Fed took on a significantly more hawkish stance to combat rising inflation. This resulted in interest rate expectations moving continuously higher through the month of April, roiling markets every step of the way. As a JP Morgan economist stated at the end of April, the Fed has turned “max hawkish”. By the end of April, the market was pricing in 160 bps of interest rate hikes over the next three Fed meetings, double the expectations of just a month ago. The result was strong downward pressure on both the equity and fixed income markets throughout the entire month of April.

With “April’s” showers behind us, what does this mean for May and beyond? One interesting data point is the number of expected Fed interest rate hikes occurring in 2022 has contracted slightly the past week. The number of expected hikes is now 9.6 vs 10.1 on April 22. Although it remains very volatile, this could indicate the market has effectively priced in rate hikes for the short term. 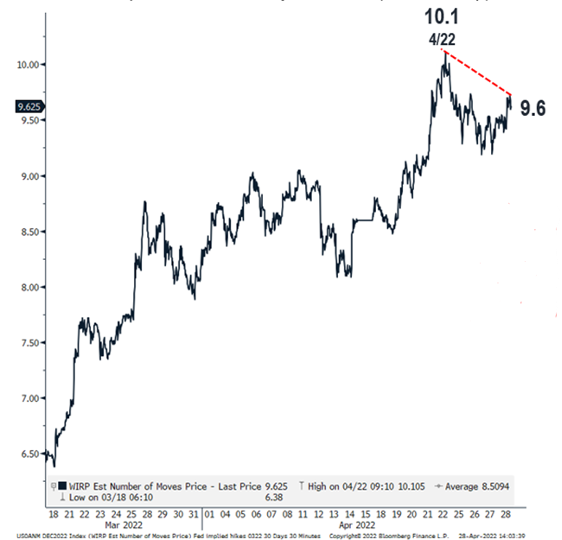 In addition, the U.S. economy enters the month of May in a position of strength. The current earnings growth expectations for the companies that make up the S&P 500 for 2022 is above 10%. Also, strong employment and jobless claims at record low levels indicate a very strong economy.

Number of Job Openings Per Unemployed Person in the U.S. at Record Level 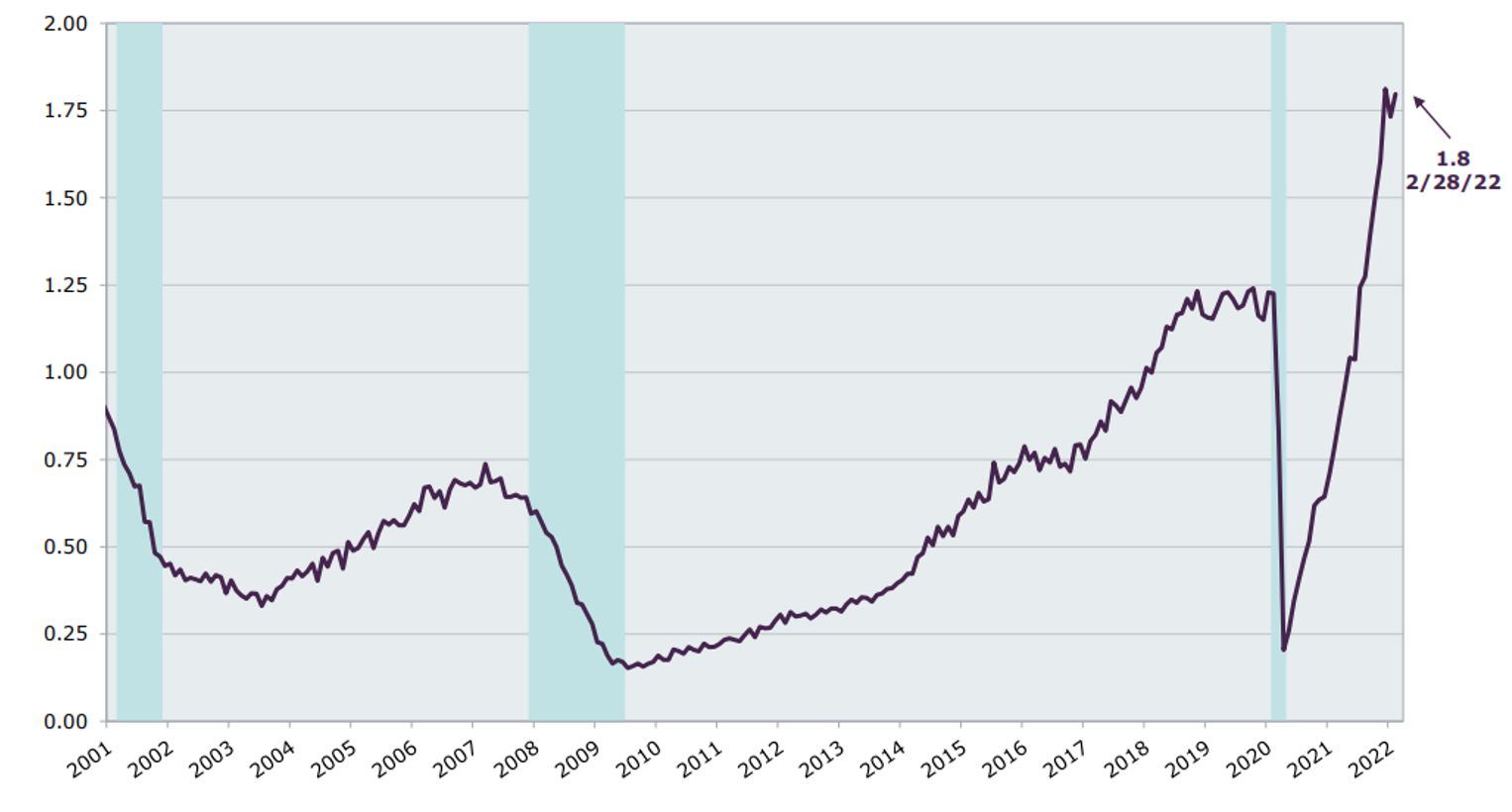 And manufacturing PMI data (a measure of economic strength) is near the best levels in a decade. Importantly, the consumer remains healthy. Consumer net worth is up 29% to $150 trillion since the end of 2019. This corresponds to a strong consumer balance sheet, with historic low levels of debt service. Combined, these attributes might be enough to delay, minimize or even possibly prevent a recession driven by rising interest rates. In the end, it will be dependent on how aggressive the Fed is in raising rates. We should add that while the recently reported GDP number declined 1.4%, the underlying data remains very strong. The report is more an illustration of how GDP calculations tend to be volatile from quarter to quarter, not necessarily indicating weakness in the economy. The contraction was due to a jump in imports and a drop in exports, along with a slower buildup of businesses’ inventory. Overall strong demand in the US relative to the rest of the world was the driver of the results.

Historically, the stock market tends to rally into year-end in years that have mid-term political elections. If this historical precedent holds, we could see a strong end to the year. 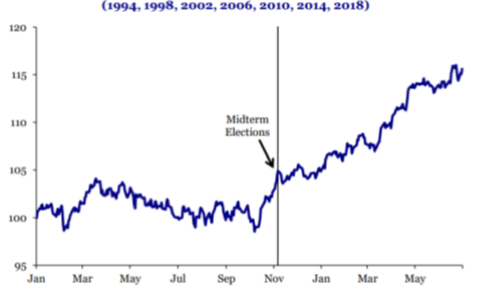 Despite the rising interest rates and market volatility, the fundamentals of the U.S. economy currently remain strong. However, there are still many clouds on the horizon as we enter the month of May, and we could see additional “April showers” going forward. The direction of the market will continue to be driven by inflation, interest rate expectations, geo-political tension, and overall economic data. Although May’s flowers might be delayed or not as plentiful as years past, there is still the potential for them to bloom if the storm clouds can clear.

Tax diversification can be achieved by having a combination of after-tax accounts and pre-tax accounts. After-tax brokerage accounts will be subject to income tax on earnings annually and capital gain tax in the years when investments are sold. A distribution from an after-tax brokerage account does not generate additional taxes as you are already paying tax on the earnings and realized gains. Pre-tax accounts like Traditional IRAs or 401k Plans are generally funded with pre-tax or tax-deductible contributions. The earnings grow tax deferred. Distributions are fully taxable as ordinary income.

A Roth IRA is like a hybrid of these two types of accounts since contributions are made after tax and then the earnings grow tax deferred and can be withdrawn tax free if you follow the Roth distribution rules.

Roth Withdrawal Ordering Rules: Normal contributions can be withdrawn at any time tax-free since they were made after tax. Withdrawals are considered to come from after tax contributions first, converted amounts second and earnings third.

5 Year Rule for Earnings: Earnings can be withdrawn tax and penalty free if you have had a Roth IRA account open for at least 5 years and you are over age 59 ½. Otherwise:

5 Year Rule for Conversions - each conversion has its own 5-year time period. If under age 59 ½, the converted amount would be subject to a 10% early distribution penalty tax if withdrawn before 5 years. 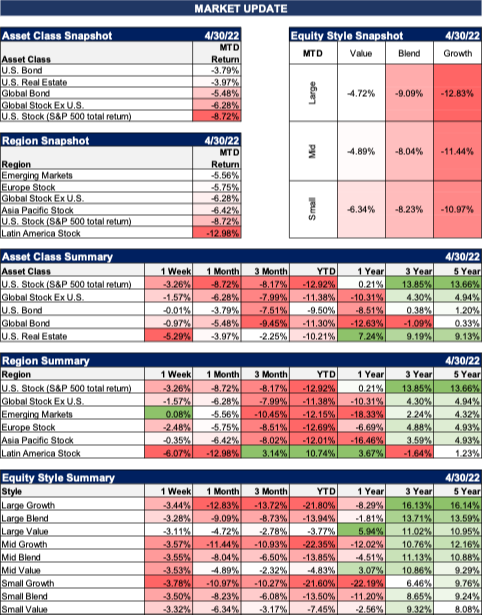